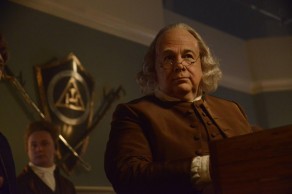 Backstory:  He helped Ichabod create the Boston Tea Party as a ruse so that Crane could attempt to take a powerful weapon from the Hessian redcoats.

Recent Developments: Ichabod was amused to see Samuel Adams misrepresented on a beer bottle. According to Crane, “Surely your historical records show that Adams would never have rolled up his sleeves. He was far too aristocratic.” Ichabod maintains that it is Paul Revere on the bottle, noting that, “Revere, on the other hand, was a Minuteman.”

Ichabod maintains that it is Revere, not Samuel Adams pictured on the popular beer.