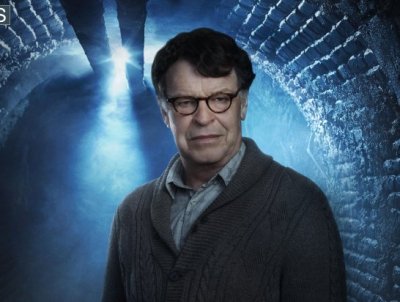 Backstory: Every culture has a version of a Sin Eater, a person with the power to cleanse the wicked of their sins through reaching into their souls and swallowing the sins, ridding them of evil. Jenny Mills knew of sightings in Algeria, Japan, Ghana and the Sin Eater absolving death-row inmates. Their last words were always: “I am sanctified.” Jenny lost track of the Sin Eater for two years.

Present Day: It was discovered that  Ichabod Crane’s had a blood connection to the Headless Horseman. Unless the blood tie was severed, Crane would die if the Horseman died and vice versa. Jenny and Lieutenant Abbie Mills found the Sin Eater living under an assumed name in Hartford, Connecticut. He claimed that he was no longer a Sin Eater, but relented to Abbie’s plea. With the connection broken, Crane gained the freedom to fight the Horseman without them dying together.

Crane Family Drama Hour: Upon learning that Katrina had given birth to a son, Jeremy, who was targeted by Moloch, Ichabod again turned to Parrish for help. Despite Henry’s warning that it would bring Ichabod closer to death, he enabled Crane to communicate with his wife in Purgatory….Henry observed that Ichabod and Abbie’s fates were merged before they met. A hesitant Henry agreed to help Ichabod find info on his descendants. He also helped Ichabod to put the Golem, Jeremy’s murderous protector to rest.

Let’s Talk About Hex: Ichabod again turned to Parrish to study the cursed prayer beads Reverend Knapp had used to briefly resurrect George Washington, allowing Washington to leave a map that could help Ichabod fight evil. The hexed beads burned Henry’s hands, but he had a glimpse of Washington’s resurrection and a vision of Father Knapp ferrying Washington’s body to a secret crypt, helping them to find the map.

Psych! Henry told Abbie and Ichabod that he had a prophetic dream about Moloch raising a creature and the Horseman of War riding against a solar eclipse. Parrish concluded that Moloch planned to bring about the Apocalypse that very day, which also happened to the 13th anniversary since the Mills sisters spotted Moloch in the woods. Henry helped Abbie and Ichabod to get to Purgatory. Abbie stayed behind while the Cranes made it to modern-day Sleepy Hollow. Katrina led them to the four white trees the Mills sisters had spotted as teens. Henry bound Katrina and Ichabod to trees and revealed that he’d sent Abbie and Ichabod to the netherworld in order to separate the Witnesses by using their faith against them: The Cranes’ faith that they’d be reunited and Abbie’s faith that she had an important purpose.

Triple Threat: Henry announced that he’s the Horseman of War and also their son, Jeremy Crane. Despite the death hex placed by the Four Who Speak as One, who then confined him to a pine box, Jeremy’s powerful magic brought him back life. After 200 years, he was raised by Moloch. God sent Abbie as a Witness to stop it, but she was not yet strong enough. After dropping that bombshell, he turned Katrina over to the Headless Horseman, banished Ichabod to a grave and broke the Second Seal.

Deal with the Devil: While presenting himself as Captain Irving’s lawyer, he tricked Frank into signing over his soul in blood. 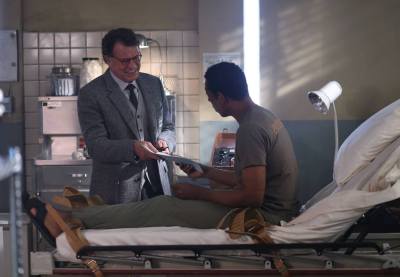 Pregnant Pause: In yet another attempt to raise Moloch, he unleashed a spider filled with poisonous Jincan venom to impregnate Katrina, so that she’d give birth to Moloch. As usual, the plan was foiled, but Eewwww. He still managed to bring a baby Moloch into the world. Demon babies grow up quickly. The overlord was ready to rise.

Giving Notice: After his Horseman of War armor was destroyed by Captain Irving who was wielding the Sword of Methuselah,  things got heated with Moloch. Despite Moloch’s order to kill Katrina, Henry killed Moloch. Good riddance.

Starting Over: With demanding boss Moloch out of the way, Henry holed up at a low-rent motel. He gave up his title as Horseman of War and is formulated new plans.

The Son Also Rises: Henry reemerged and persuaded his mother to join him on the dark side. With the use of a cursed bell, they planned to raise a coven and preside over it. With Ichabod’s consent, Abbie fatally shot Henry.

Given to: Resenting his parents, filling out crossword puzzles, tending to plants, paying close attention to train schedules, using aliases, hiding his past, whittling impressive miniatures with a pocket knife.

Notable Victim: Moloch, a group of thugs, whom he killed just by waving a hand.

Quote:  “A good puzzle misleads you. It sends you in one direction, fools you into thinking you know what’s going on. But once you’ve discovered the trick, you see that there’s often a hidden meaning.”

The Horseman is actually Death, one of the Four Horsemen of the Apocalypse. Special Abilities: Withstanding bullets and arrows. He...