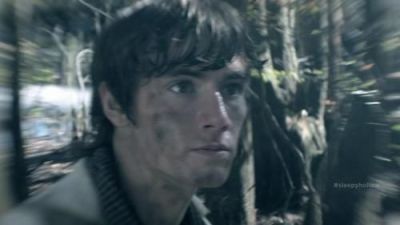 Backstory: Katrina Crane found out she was pregnant after she cast a spell on Ichabod and buried him to save his life. Her coven set out to punish her for interfering with fate, so she sought refuge at Fredericks Manor where her baby was delivered by Abbie Mills‘ ancestor Grace Dixon. Katrina named the child Jeremy after Ichabod’s grandfather. Shortly after his birth, Jeremy was targeted by Moloch, who sent the evil tree-like Scarecrow after the child. Fearing that her son would have to live as a fugitive, Katrina asked Grace and her husband Joseph to raise the child. Townspeople were afraid of the boy, claiming that he could start fires just by crying. After the Dixons died in a fire, Jeremy was sent to an orphanage where he was mistreated by a priest who beat the boy to rid him of his “affliction.” When a drop of Jeremy’s blood fell on the doll his mother had given him for protection, it summoned the Golem who killed the priest… With no one else to look out for him, Jeremy turned to the murderous Golem as a friend and father figure. When word spread about Jeremy’s growing power, Jeremy and the Golem were hunted. The Golem killed anyone who meant to harm Jeremy. When The Four Who Speak as One found Jeremy, he refused to give up the Golem, so they imprisoned the Golem in the netherworld. Unable to bring a halt to Jeremy’s evil ways, they invoked a hex to stop his heart and buried him in a pine box.

Recent Developments: Ichabod first learned of his child after Abbie had a vision at Fredericks Manor. Searching for answers, he went to the Sin Eater, Henry Parrish and a seemingly reluctant Henry helped Ichabod to communicate with Katrina in Purgatory to learn the truth about their son.

Family Crisis: After Ichabod was able to rescue Katrina from Purgatory, Henry revealed that he is actually their presumed-dead son and the Horseman of War. He waged war against the Witnesses and ended up being killed by Abbie.