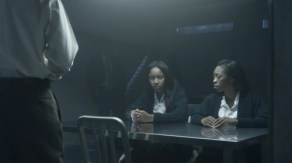 Backstory: The sisters were raised in foster care after their alcoholic father bailed on the family and their mother was placed in Tarrytown Psychiatric. Mrs. Mills subsequently committed suicide. After the age of 12, Abbie was raised in one stable foster home, while Jenny was placed in seven different ones. When the girls went to the woods to secretly drink beer, they saw four strange white trees and the demon Moloch. Though it only seemed like a few minutes, the girls passed out for four days. They were eventually found by Garrett Gillespie (Pete Burris), who was part of a search party. Abbie didn’t want to get in trouble for sneaking beer and kept the whole story including their supernatural encounter to herself and urged her sister to do the same; Jenny insisted on telling the cops about what happened and they thought she was unstable. Jenny was sent to the psychiatric hospital. The sisters were estranged for many years.

Recent Developments: When a grown-up Abbie entered Purgatory and was chased by Moloch, she found refuge in a dollhouse like the one she and Jenny used to play with. The teen version of the Mills sisters came to her in a vision and told Abbie that after the incident in the woods, Moloch made them forget the truth, that they saw him unbind the Horseman of War. God sent Abbie as a Witness to stop it, but she wasn’t yet strong enough.

The Mills sisters' mom was just misunderstood. Pushed to suicide she was battling literal demons.