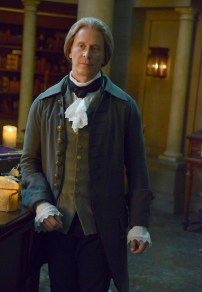 First Appearance: “What Lies Beneath”

Backstory: Jefferson designed a hexed cell that could hold demons.

Recent Developments: Ichabod was shocked to learn about Jefferson and Sally Hemings. Abbie and Captain Irving revealed to Ichabod that Jefferson took credit for Crane’s quote: “The man who reads nothing at all is better educated than the man who reads nothing but newspapers.”… Jefferson’s cell was used to contain the Horseman. The cell seemed to hold Henry, but it was a big fake out…. The cell also held the man-beast Wendigo…. Jefferson built the fenestella, an underground chamber which contained valuable information to help the Witnesses accomplish their missions.

Given to: An obsession with puns

He helped Ichabod create the Boston Tea Party as a ruse.