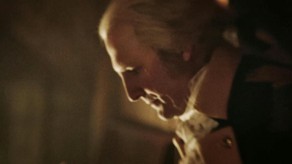 Backstory: Washington warned Ichabod that the Revolution was not just a war for the country, but would determine the fates of every man, woman and child on Earth. The General ordered Ichabod to kill an unknown mercenary with a bow branded on his hand, the Horseman…. Washington instructed Ichabod to claim a stone chest containing a secret weapon from the Hessians, which led Ichabod to devise the Boston Tea Party as a cover story. Unbeknownst to Ichabod, his wife Katrina, also spied for Washington.

Recent Developments: He left a Bible for Ichabod with a marked passage about the Four Horsemen of the Apocalypse. The Bible also included the revelation that Ichabod is the First Witness meant to prevent the End of Days…. Using invisible ink, Washington wrote a clue in the Bible dated December 18, 1799, four days after his death. It was revealed that Washington was briefly resurrected by Reverend Knapp using cursed beads. While existing between worlds, Washington could bring information from one realm to the other, his final mission was to leave Ichabod a map charting the path from Earth to Purgatory, a powerful weapon against evil forces. His secret crypt is on Bannerman Island along the Hudson River.

Given To: "Air baths, and royally pissing off his apprentice Ichabod who labels Franklin as a “Blowhard, braggart, blatherskite and...