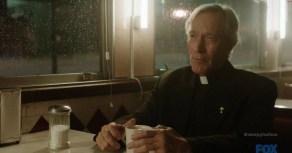 Backstory: One of Ichabod’s contemporaries and a member of the same coven as Katrina, devoted to hiding the Horseman’s skull. His “cursed prayer beads” were used to briefly bring George Washington back from the dead for a final mission: leaving messages in his Bible about a map that would help Ichabod fight evil.

Recent Developments: Decapitated by the Headless Horseman for refusing to reveal the location of the creature’s skull. It was revealed that Knapp ferried Washington to a secret grave on Bannerman Island, along the Hudson River.

Given To: Keeping secrets, obviously eavesdropping on Sheriff Corbin and Abbie

Famous Last Words:  “I’ll never tell you where it is. I’m prepared to die.”

Rutledge and The Freemasons Bio

The Freemasons First Appearance: “The Sin Eater” Backstory: Ichabod Crane was a member of the Freemasons, who guarded secrets and artifacts...