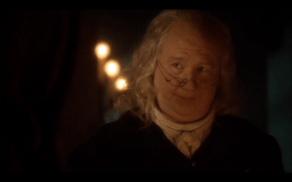 First Appearance: “The Vessel”(Sparks); “This is War” (Busfield)

Backstory: Ichabod was Franklin’s apprentice. Franklin was adept at fighting evil and sometimes aligned himself with Katrina’s coven.The French gave him lanterns with which to exorcise demons. He also became a bit of a Franklin-stein when he stitched together the parts of fallen soldiers to create a creature, The Kindred, that could rival the Horseman of Death it was never animated because it was missing a vital component, a body part from the Horseman.

Recent Developments: One of Franklin’s French lanterns was used to free Macey Irving from possession by soul-jumping demon Ancitif. That whole key on a kite experiment was not about electricity, Franklin was trying to destroy the Gehenna key that allowed souls in Purgatory to cross over into this world. Franklin wanted to destroy the key so that it wouldn’t be used for evil. When Abbie was trapped in the netherworld, Ichabod utilized the key to save her…. Ichabod and a reluctant Abbie attached the skull of the Horseman of Death’s to The Kindred, Franklin’s mutant. The monster successfully battled the Horsemen of Death and War, before galloping off with the Horseman’s head. When Abbie ended up in 1781, thanks to Katrina’s time-travel spell, he attempted to help her return to the 21st century. The Horseman, working as Katrina’s minion, arrived and beheaded Franklin. Grace Dixon performed a reversal spell, to send Abbie home, which means Franklin kept his head (we think.)

Given To: “Air baths,” royally pissing off Ichabod who labels Franklin a “Blowhard, braggart, blatherskite and gasbag,” being charmed by Abbie, a genial nature and innovative ideas..

Jefferson took credit for Crane’s quote: “The man who reads nothing at all is better educated than the man who...