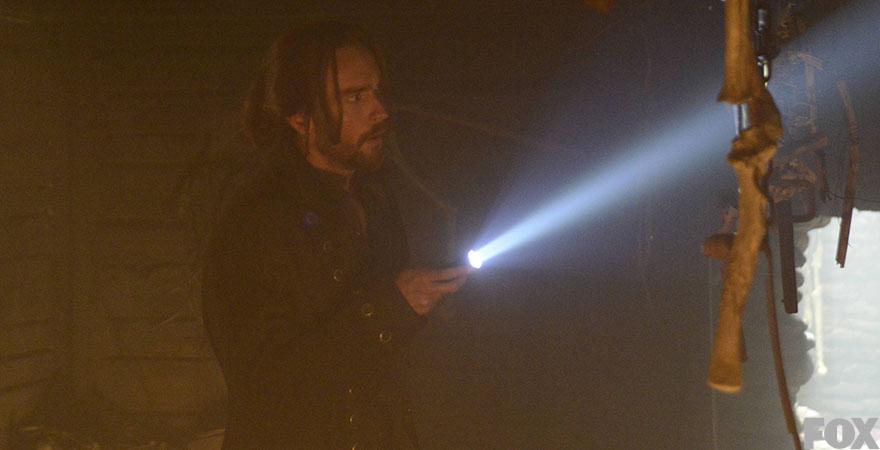 Theme: Every parent’s fear, awful sacrifices, and a creature of the week that makes the Horseman seem warm and fuzzy.

Abbie and Ichabod’s new Scooby Gang member, shady Nick Hawley is back. He’s helpful when it serves him. A tune pulls ten-year-old Sara Lancaster (Abigail Cornell) from her home in the middle of the night and she drifts into the misty woods.

Quotable Ichabbie: The partners are in a parking lot.

Ichabod: I have faced many enemies on horseback. Horsemen without heads. Even discovered my own son is the apocalyptic Horseman of War. Thus, how challenging must it be to guide the power of 300 horses using only one’s right foot?
(Revs engine)
Abbie: Crane, you’ve seen me do this a thousand times. You have an eidetic memory. Do not tell me that you do not have this. Also, I happen to know that you’ve been practicing your driving with Jenny, who’s had her license suspended twice, by the way.
Ichabod: Firstly, I fail to see why each and every human on the planet must utilize a motor vehicle. And secondly, if you’re implying I would use this conveyance without your express permission…
Abbie: That gauge right there doesn’t lie.
Ichabod: The odometer. Curse you, Franklin, for inventing such a treacherous device.
Abbie: Crane, if we’re gonna win this war, you need to master certain skills from this era. Ergo, you need to drive a damn car.

Truth Be Told: Ichabod tells his “Leftenant” that she can drop the facade; he knows that she’s updating his skills in case anything happens to her. He adds that it’s not the Witnesses’ fate for one to bury the other and they will be “victorious or defeated… together.”

Little Girl Lost: Ichabod and Abbie respond to an Amber alert at the Lancaster home. The distraught parents adopted three boys before Sara, the missing girl, was born. Beth Lancaster (Francie Swift) says her family is cursed. Like most guest stars, Beth is connected to Abbie; she was her caseworker, whom Abbie credits with guiding her (along with Sheriff Corbin, of course.) The lieutenant catches Ichabod trying to get in through a window and points out that lurking in the bushes isn’t helpful. Seriously, Ichabod, not all of your ideas are sound. Let’s not forget animating Benjamin Frankenstein’s mutant, who galloped off with the Horseman’s skull.

Into the Woods: In the woods Crane says that ancestor Daniel Forbes Lancaster (John Colton) was despised by General Washington, he only joined the patriots after the tide turned against the Brits. Ichabod notices a big blood splatter on a tree. The Lieutenant should have spotted it first, but okay, Show. Abbie does discover an item that looks like a hollow bone. Violating all kinds of police procedure, she picks it up with bare hands, then gives it to Ichabod who further destroys evidence by wiping the object. Anyways, Crane recognizes it as a Jiahu gudi, an ancient Chinese bone flute. He plays it, treating us to bizzaro camerawork, which makes it seem that Abbie took some shrooms. Ichabod stops her from wandering off and proclaims the instrument belongs to the the Pied Piper. 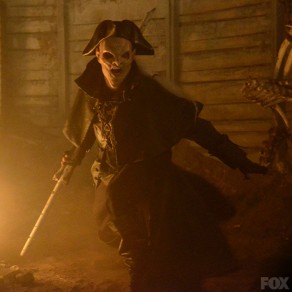 The Piper has a bone to pick.

Exposition Fairy: The sleuths find a bloody Hawley, who was searching for the flute in order to sell it. He saw Sara and was attacked by the Pied Piper; The men flesh out details on the Lancaster curse which began in 1778. Redcoats got handsy with the daughters of Daniel Lancaster who paid the Piper to lure the pervs to their deaths; Daniel then killed the Piper. This was an extraordinarily bad idea. As a human, the Piper sold his soul which yielded superhuman strength. After death, he arose as a demon and not the forgiving kind. Every subsequent generation loses a Lancaster daughter on her tenth birthday and the piper uses her bones for a flute. Crane balks at working with Hawley who stole the Judas coins from them, Mills maintains it’s worth the trouble if they get Sara back.

Nightmare Fuel: The trio enter the Piper’s terrifying lair. They rescue Sara who has no memory of how she got to the woods. Hawley rejects returning to kill the Piper, he just wants the flute. Abbie didn’t plan to give him another powerful weapon, so she breaks it first. 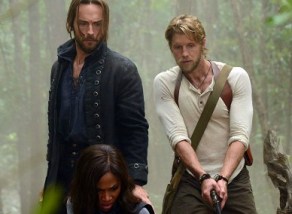 Wicked Ways: Sara is returned to her parents, Abbie and Ichabod notice that Mrs. Lancaster looks displeased. Crane and Lieutenant Mills do more research on the Lancaster curse and determine that Beth willingly sacrificed her daughter to save her other three children. In fact, the boys have all become ill. Armed with noise-cancelling earbuds, Abbie and Ichabod race to the woods and find that an unglued Beth has taken Sara back there. She confirms that if the Pied Piper doesn’t get one child, he takes them all. The Piper appears, after a battle in the lair, he’s killed by Ichabod and Abbie.

Quibble: Abbie and Ichabod relax with cappuccinos at waterfront location which looks nothing like the Hudson River. I know this show is shot in North Carolina, but it’s distracting to a former Westchester girl.

Soul Mates: In last week’s episode, Ichabod visited Captain Irving at Tarrytown Psychiatric to warn that his lawyer, Henry, is also the Horseman of War. Irving reads a Bible passage on the End of Days and has a vision of battling alongside War. The Bible bursts into flames. Irving tries to fire Henry, who threatens to cut the funding Cynthia gets from the Policeman’s Board, end insurance payments for Macey’s medical bills, and delay Irving’s court hearing indefinitely. Frank stares him down, but Parrish argues that the Witnesses have brought Irving nothing but trouble. When Frank asks what Henry did to him the Horseman of War directs him to Ezekiel 18:4, which reads: “Behold, all souls are mine.” Irving flashes back to pricking himself with blood as he signed Parrish’s contract and it dawns on him that Henry took his soul.

Cliffhanger: As Hawley sits in a bar eating peanuts, a man approaches and asks, “You have it?” Hawley gives the fellow the broken flute, of course it’s for Henry, who smashes the flute with a mortar and pestle and declares: “It’s perfect.”

There are rifts this week. The Mills sisters repaired relationship is again threatened. Katrina pits Abraham Van Brunt against Henry....